Chuck Norris, the martial artist, and actor continues to be the subject of intense interest decades after his last starring role. 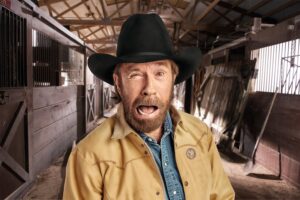 Born Carlos Ray Norris in 1940 in Ryan, Oklahoma, he was raised on a farm near Wilburton along with his three brothers. Chuck Norris’ most famous roles were as Mike Stone in the television series “Walker Texas Ranger” and as Cordell Walker in “The Fall Guy”.

Chuck Norris is also known for his complete knowledge of pressure points and for being able to roundhouse kick over 12 feet high. He has written numerous books including “Black Belt Patriotism” and “The Official Chuck Norris Fact Book: 101 of Chuck’s Favorite Facts and Stories (100% Factual)”.

Here are the top 75 facts about Chuck Norris (that are 0% true):