Ms Dewey : Is this the Future of Search Engines?

Ms. Dewey (http://www.msdewey.com/) is the latest experimental search interface from Microsoft. They haven’t yet marketed it and they want it to be explored in the natural way. Although it uses the MS live search results, It is quite different from the conventional search engines (the search interface actually) in many ways.

You can access Ms. Dewey can just by popping up the web browser and entering the msdewey.com in the address bar, now press enter and… wow! Ms. Dewey is ready at your service. 🙂

Ms. Dewey is attractive, smart, funny, naughty, interactive search assistant that even comments on the searched keywords in her own style. 🙂

Try it yourself. Try using keywords like: “Microsoft”, “Google”, “Internet”, “India”, “George W Bush”, “Vegas”, “Diamonds”, “iPod”, “Linux”, “Apache”, “blow”, “Spammer”, “Bomb” etc.Â  and see her response. There are many other direct keywords which may result in unexpected actions at her end. Like try asking her phone number and she will threaten to call the police, or call her a bitch and see the result for yourself. 😛 OR enter “Joke” and she will share a stupid joke. Using these keywords repetitively may get different results. There are many-many more such keyowrds, try exploring yourself. 🙂 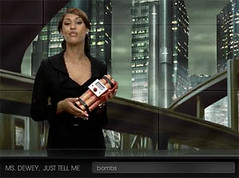 She will keep you busy for a while with her attitude, comments and actions. Not only that she will even try to drive your attention to herself by even knocking your computer screen or shouting; if you stop entering the search terms. Keep her waiting and she will get furious to some extent. LOL 🙂

Microsoft is working really hard on new innovations and this one is quite interesting example of that. But one thing they forgot is that Ms. Dewey is supposed to assist the user in search and entertain him/her, But the current interface has very little and hard to access search result section. You can only see about three search results at a given time, more results can be access by placing the mouse pointer just below the results to scroll the result section it is not user friendly at all.

Ms. Dewey is interactive virtual girl who tries to make searching fun. But her actions may sometime annoy people.

And now some interesting facts about the model playing the role ofÂ  Ms. Dewey. Oh yes… She is real. But on the part you may only access the computer generated real-time interactive Reponses, which are already in the system.

Actually Janina Gavankar is Ms. Dewey. Her official site is: JaninaGavankar.com . From Wikipedia:

Janina Gavankar, also known as Janina Ziona or simply Janina Z, is an American actress and musician of Indian and Dutch descent.

Gavankar’s father is Pete Gavankar, producer of RD Burman’s only American album, “Pantera”. Janina Gavankar is a classically trained pianist, vocalist, and orchestral percussionist. She majored in Theatre Performance in Chicago during her college years.

At one point, Gavankar was part of a singing group, Endera. They were signed to a subsidiary label of Universal Records and did one album, including a brief tour, before finally disbanding. She collaborated on a music project in India with Pratichee of Viva (band), Deep, and Navraaz.

She has worked in movies like Cup of My Blood, Dark, Barbershop etc. she is also producing a film title ‘The 1 Second Film‘ which is going to be released in 2007.

Plus Points: Interactive, Sexy, Cool search assistant that amuses the user with her attitude, comments and actions while delivering some search results.

Negative points: Discourteous comments for some keywords related to Microsoft’s competitors (like Google or Linux). Also some of her actions may annoy people.

GeekLord‘s Perception: She is better then The Subservient Chicken, but NOT the Google Alternative at all.

4 responses to “Ms Dewey : Is this the Future of Search Engines?”